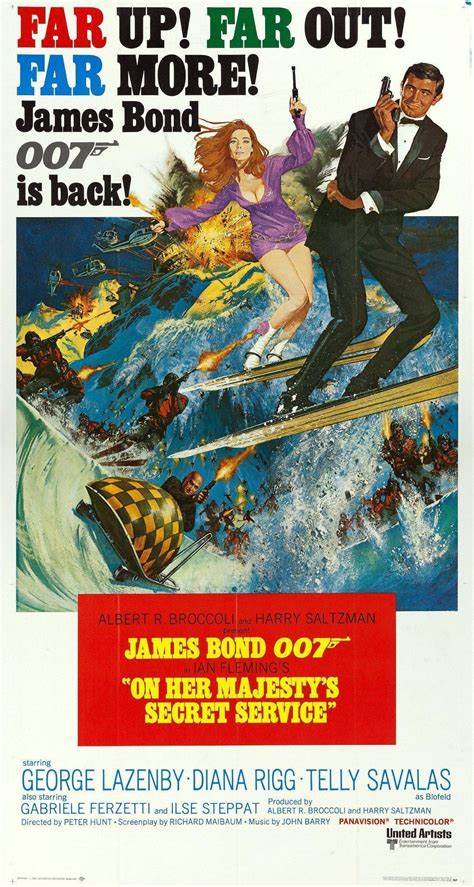 James Bond is on the trail of his old foe, Ernst Stavro Blofeld, and tries to uncover his latest plan by traveling to the Swiss Alps. In doing so, Bond must fend off mob boss, Draco, but becomes ensnared by his daughter, Tracy. Here are a few movie mistakes to look for while watching 1969’s “On Her Majesty’s Secret Service”.

· At the beginning of the movie, at the beach, the man tells James to get in the boat. James is on his back and in the wider view of the man hovering over him, James is shown kicking and throwing the anchor / hook at him. The scene cuts to a close-up view of James and he throws the anchor / hook again.

· Bond is taken to see Draco. Draco gives him a glass and, in the wider view, after they clink glasses, Bond is holding the glass in his right hand with his left arm falling across his lap. It cuts to a close-up view of Bond and he’s holding the glass with both hands.

· Bond sneaks into Ruby’s room. In the front view of her, when she tells Bond her name, Ruby bends her arm and puts her right hand on the back of her head. It cuts to a right, rear view and her hand is down. The scene cuts back to the original view when Bond asks how she got there and her hand is back on her head. In the next rear view, when Ruby asks, “Do we have to talk about that now?”, and her arm is down.

· CAUTION: May Contain Spoilers! At the end of the movie, after they are married and driving away, a rear view of Bond and Tracy in the car shows Tracy’s right arm is down and she’s shown waving to someone outside. She then lowers her arm when James starts talking. It cuts to a right side view and Tracy’s right arm is propped up, on the seat. It cuts back to the original view when James mentions, “not bad for a start”, and Tracy’s arm is down again. It’s back up on the seat when he tells her they have all the time in the world. Her arm is down again in the rear view when the car behind them starts to blow the horn.

Get your copy of my latest – Reel to Reel – Movie Mistakes from Hollywood’s Favorite Films.

Content copyright © 2022 by Isla Grey. All rights reserved.
This content was written by Isla Grey. If you wish to use this content in any manner, you need written permission. Contact Isla Grey for details.

Stop by our forums to share the mistakes you´ve discovered, I would love to hear about them!